Once again, Google sticks its thumb in America’s eye.

In the early days of Google’s “holiday art” shtick, where they would put up something special to celebrate Beethoven’s birthday, or the anniversary of Earth Day, I noticed that they missed one on Washington’s birthday. I wrote them an email advising them of the oversight, and in their reply they mumbled about not being able to cover everything. Something on the order of “we try to cover all the important birthdays and anniversaries, but we occasionally miss one.”

I don’t, however, believe I’ve ever seen a Google art piece for Washington’s birthday, Reagan’s birthday, or celebrations of the Tomb of the Unknown Soldier, the Marine Corps birthday, or anything else that might be construed as patriotic or conservative . . . except when it really can’t be avoided.

Last year’s “Google Doodle” managed to “celebrate” July 4th . . . without actually indulging in any patriotism (and without a flag):

And the year before… 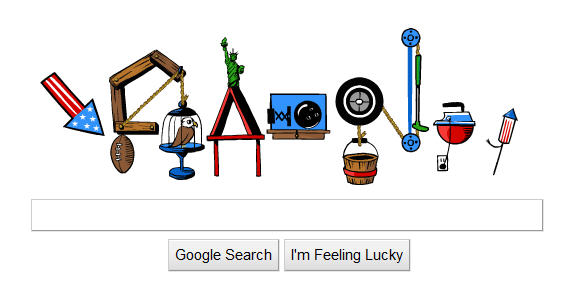 Yes, that’s a celebration of Rube Goldberg (and July 4th).

The only one that I remember as seeming at all patriotic was from 2003:

This year, however, they went one level deeper into devious. While whipping up a “patriotic” looking doodle, they managed to just happen to settle on a patriotic song title from the past — one by a raving communist — Woody Guthrie.

So, while those who have no background for it will see it as a (*choke* – *gag*) patriotic glyph, those who were there and who remember the icons of the 50s and 60s will smile knowingly. Woody was their patriot.

Would it be inappropriate for me to assign them the appellation “asshats?”