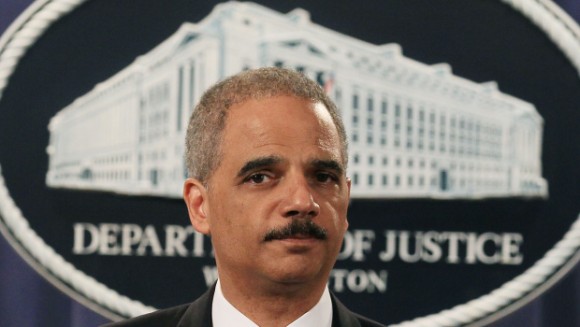 The media had their big off-the-record meeting with Attorney General Eric Holder and his staff on Thursday, and immediately turned around and talked about what was discussed at the meeting. In effect, Holder threw sand in the eyes of the journalists who attended, and put himself in charge of fixing whatever they think needs fixing. He’s even supporting a federal media shield law to protect them from his own overreach in the future. And they seem to have believed him. “Attorney General Eric Holder expressed concern on Thursday about how the Department of Justice has handled recent media investigations at an off-the-record meeting with leading representatives of the press, according to those who were present,” wrote Dylan Byers of Politico. He added that Holder “expressed a willingness to revise the guidelines for such investigations,” though he “stopped short of offering any concrete changes to the guidelines.” Byers said the meeting lasted “one-hour.” Politico’s editor-in-chief John Harris attended the meeting on behalf of Politico.

According to The Washington Post article, by Sari Horwitz, the meeting lasted “90 minutes” and Holder “pledged” to “take concrete steps to address concerns that the Justice Department has overreached in its leak investigations and said officials would seek procedural and possibly legislative changes to protect journalists’ First Amendment rights.” Maybe that pledge came in the extra half-hour that the Post got with Holder. Horwitz didn’t attend the meeting, but her boss, Martin Baron, executive editor of The Washington Post did. He was quoted as saying, “We expressed our concerns that reporters felt some fear for doing their jobs—that they were concerned about using their email and concerned about using their office telephones, and that we need to have the freedom to do our jobs.”

James Warren, Washington bureau chief of The New York Daily News also called it a 90-minute meeting. Warren wrote that Holder “pledged reassessment of relevant guidelines in an effort to respect the role of reporters.” He said that the meeting “concluded with an informal discussion and agreement about what generally could be reported publicly” from the meeting, meaning that what couldn’t be reported publicly was also agreed upon.

Gerald Seib, Washington bureau chief of The Wall Street Journal who also attended the meeting, said, “There was a commitment to change the department’s guidelines for handling cases such as these and a renewed commitment to support a federal shield law for journalists.”

The other journalist who was there was Jane Mayer of The New Yorker magazine.

This looks like clever PR by the Obama administration to take the heat off of a situation in which enough facts are already known and agreed upon to make this undeniably a serious scandal. With the IRS and Benghazi scandals, the Administration still claims that mismanagement and incompetence of mid-level civil servants are to blame, and that the people at the top—Obama, Holder, and Hillary Clinton—knew nothing.

In this case, however, it is already established that Holder signed off on the affidavit for a search warrant on James Rosen of Fox News, calling him a possible co-conspirator and a flight risk, something for which Holder now claims to feel remorseful. Regarding the seizure of the Associated Press’s phone records without advance notice, Holder claims to have recused himself, although he is unable to document it. And perhaps most importantly, he lied to either Congress or to federal judges.

Holder was accompanied at the meeting by seven staff members and Deputy Attorney General James Cole, who they claim was the person who actually authorized the seizure of the Associated Press phone records since Holder had recused himself.

As Jonathan Tobin of Commentary magazine pointed out, “Though Holder appears to have either perjured himself when he appeared before a House committee on May 15 when testifying about prosecutions of journalists or else lied on the documents he sent to federal judges to get them to authorize the snooping on James Rosen, many in the press have reverted to form and are giving him a pass.”

He is referring to Holder’s statement on May 15 “when specifically questioned by Rep. Hank Johnson (D-Georgia) about the possibility of journalists being prosecuted under the Espionage Act for reporting information that the government labeled as classified:

‘With regard to the potential prosecution of the press for the disclosure of material, that is not something that I’ve ever been involved in, heard of or would think would be a wise policy. In fact, my view is quite the opposite.’” (emphasis added)

“Yet we know,” wrote Tobin, “that early in Obama’s first term, Holder had personally signed off on requests for judicial permission to read James Rosen’s emails and seize his phone records by labeling him as a ‘co-conspirator’ and someone who ‘aided and abetted’ a crime by seeking to get a source to give him information.”

We also know that the Justice Department ignored its own guidelines in dealing with these news organizations, and that back in 2010, Holder went shopping for a judge who would sign off on the warrant without requiring that Rosen be notified. He was turned down twice before finding a judge who would agree to go along with it.

Before the meeting on Thursday took place, and the rules changed from off-the-record to mostly on-the-record, there was a vigorous debate over whether or not media organizations should attend. After all, they go for off-the-record meetings all the time, just not usually under the glare of a spotlight.

“I’m generally open to off the record conversations with officials that are editorial in nature, but this meeting is about whether what the press does is criminal activity or not,” said The Huffington Post’s Washington bureau chief Ryan Grim, according to Politico. “A conversation specifically about the freedom of the press should be an open one. We have a responsibility not to betray that.”

“Meeting secretly with Holder borders on hypocrisy,” writes Ron Fournier for the National Journal in a piece titled “7 Reasons Why the Media Shouldn’t Keep Eric Holder’s Secrets.” “There is an uncomfortable irony in the fact that an attorney general investigating his policy for spying on the media is asking the media to keep his words secret.”

“One wonders why the media would trust Holder’s motive,” added Fournier, “ given how the administration has conducted itself so far.”

This is not the first off-the-record meeting that has been held by the Administration in recent weeks. On May 10, White House spokesman Jay Carney canceled the on-the-record press corps briefing for an off-the-record discussion about Benghazi. Then, last week, the President met twice with groups of reporters. And The Washington Post’s Paul Farhi, in his May 14 article about tensions between Obama and the press corps, discussed an off-the-record meeting about the IRS scandal. “Clearly on the defensive—as much because of questions about its handling of the September attack in Benghazi and a budding IRS scandal—the White House’s press operation cranked up the charm and access,” Farhi wrote.

“It invited a select group of reporters from leading news outlets to off-the-record briefings about the Benghazi, IRS and Justice Department stories with a senior communications official…‘All of a sudden, they need us,’ said one reporter who attended the briefing but asked not to be identified to preserve his working relationships,” reported Farhi.

There’s a pattern here, and it isn’t a good one. The President and his subordinates would rather meet with reporters to solidify their good relations with the press than address the issues at hand: Benghazi, the IRS, and targeting the press. In other words, the President doesn’t want his words to actually reach the American people or, at least, to be acknowledged as coming from the White House. That’s because Holder’s and President Obama’s credibility are severely damaged.

The Administration is going into damage control mode. The media are determined to show that this time they refuse to be used by the Obama administration, in light of the Fox News and AP snooping scandals. While Eric Holder is trying to dig himself out of this hole, the Administration is simply trying to figure out how to weather the storm.

At this point, Obama and Holder need each other. They each hold the other’s future in their hands. Neither could stand a truly independent examination of their recent actions and claims.

The protests started after the government of Prime Minister Recep Tayyip Erdogan announced plans to redevelop historic Gezi Park in Istanbul’s Taksim Square into a shopping mall. This upset locals who staged a sit-in protest. The protests escalated into a mass uprising after the original group was attacked by government forces.

What started at the beginning of the week as an environmental protest aimed at saving the park from a shopping mall has snowballed into a national display of anger at the Erdogan government.

Istanbul park protests sow the seeds of a Turkish spring

A ringside seat as Istanbul protests