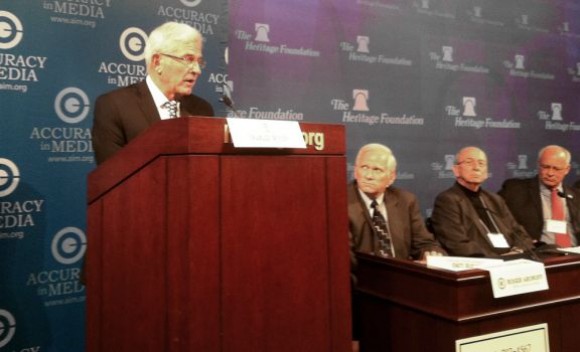 Four people tragically died in the Benghazi, Libya attacks last September: Ambassador Chris Stevens, Sean Smith, Glen Doherty, and Ty Woods. Yet no one, to date, has been held accountable. “I appreciate the fact that this Citizens’ [Commission] is here, but I wish that it wasn’t necessary,” said Charles Woods, father of Ty Woods. “I wish that it was not necessary, because the truth voluntarily should have been presented by our Administration.”

Woods was speaking at the recent conference held by the Citizens’ Commission on Benghazi. He was joined by Congressman Frank Wolf (R-VA), who passionately argued for a Select Committee to investigate the events that happened on September 11, 2012. “I think that Congress, if Congress fails to do this…will be complicit in the cover-up,” Congressman Wolf argued. “Now…one year has passed. Not one month, not two months, not three months, one year!”

The conference was organized by Accuracy in Media, and held at The Heritage Foundation. If you missed the conference, or want to learn more about it, please take a look at the program. The comments by the members of the commission, plus those of the featured speakers and the Q&A periods that followed, are all now up on this page on the website, in the order that they took place. Again, the videos of each of these excellent speeches are now posted online under the tab “September 16th conference.” Please watch some of the comments, and forward them to people you know who might be interested. The transcripts will be added in the near future.