Stand for Truth & The Blaze

It has been reported that many of America’s youth are opting to shed their parents’ capitalist views for a socialist viewpoint, one that advocates for the establishment of a classless society, but one in which the government controls all means of production and distribution of goods.

The trend toward socialism was especially apparent during the Occupy Wall Street Movement which epitomized the principles of socialism. Calls for equality, liberty, and solidarity of the collective, were frequently championed over the individual.

The results of the poll clearly illustrate that the 18-29 age group favors socialism over capitalism and there is no indication that this trend will reverse itself.

Some are baffled as to why our youth would consider socialism and reject capitalism.

There are those who blame it on the poor economy which has necessitated young people’s extended stay with their parents and fewer job opportunities, which are the highest, since World War II.

However, do these factors really represent the reasons for the appeal of socialism to this age group in America?

When you take a look at who influences our public education system, it should come as no surprise that socialism is luring our American youth away from capitalism on a daily basis.

Children have been taught the principles of socialism since the early 1900s, right under the noses of their parents and caregivers.

One of the most influential men in our American public education system was John Dewey, best known as “the father of modern education.” Dewey was a dedicated socialist and a member of 15 Marxist organizations. He taught those that trained America’s teachers.

Dewey believed that it was not possible to make socialists out of individuals. Therefore, developing children into being able to think for themselves would, as he put it, “spoil the harmony of the collective society.”

The National Education Association that honored Dewey for his contributions to education, previously stated, “We stand for socializing the individual.” The organization firmly believes that, “The major function of the school is the social orientation of the individual… Education must operate according to a well-formulated social policy.”

One of the association’s specialists, Paul Haubner, once stated that, “The schools cannot allow parents to influence the kind of values-education their children receive in school; that is what is wrong with those who say there is a universal system of values. Our goals are incompatible with theirs. We must change their values.”

More recently, Chester M. Pierce, M.D., Professor of Education and Psychiatry at Harvard, believed that every child entering school is essentially mentally ill because the child comes to school with certain “allegiances to our Founding Fathers, toward our elected officials, toward his parents, toward a belief in a supernatural being, and toward the sovereignty of this nation as a separate entity.”

Pierce strongly believed that it was up to teachers to make all of these sick children well, “by creating the international child of the future.”

The same principles of socialism espoused by Dewey and others are alive and well today in the Obama administration’s public education system.

One of the most obvious examples, is the implementation of the Common Core State Standards that boasts the coming together of state education chiefs and governors in 48 states to develop a set of “clear college- and career-ready standards for kindergarten through 12th grade.” Parents and teachers were noticeably absent from the list of those who participated in developing the standards.

The Obama administration gave $360 million to the group of states that wrote the new Common Core tests. It also provided other incentives to states that adopted the curriculum, by saying that states adopting “college and career ready” standards had a better chance of winning federal dollars.

The Common Core website states that the standards prompt equity among the students. The goal of Common Core is to set benchmarks that will ensure that students in every state are learning the same educational information.

The participation by the federal government in financing the educational project, the creation of the standards by state education chiefs and governors without parent or teacher involvement, along with the goal of an equitable education for all, strongly evidences present day philosophies of socialism in America’s public school system.

There is further evidence of socialism in our public schools today.

Earlier this year, the Obama administration introduced new guidelines for school discipline. These guidelines were purportedly designed to eliminate racial disparity in schools by proposing an end to how students of different races are punished for violating school rules.

The concept of government involvement in developing rules for social justice in public schools is in-line with the teaching of socialism.

Social justice allows an opportunity for the student to realize their potential inside of the society in which they live. The goal of social justice is to ensure fair distribution of wealth, equality of opportunity, and no gross inequality of outcome. A perfect socialist society!

Teaching for social justice means making allowances for the recognition of differences in people and their backgrounds to overcome “institutional inequities and historical power imbalances.”

In other words, achieving equality under the socialist ideology doesn’t always require equal treatment in all cases.

The concept of social justice, may also allow certain individuals, based upon ethnicity, minority status, or other differences, to be treated “better” in order to achieve equality in a society that has a legacy of colonialism and other forms of oppression, such as “white privilege.” This would seem to fly in the face of socialism’s equality doctrine but apparently makes sense to those who peddle socialist tenets.

Other examples of the existence of socialist principles within our schools are evidenced by the introduction of Michelle Obama’s mostly unpopular school lunch program and her Let’s Move program to resolve your child’s obesity issues.

Such programs, appear intentionally designed to take the control out of parents’ hands and put them squarely in the hands of the state which promises equality for all under the doctrine of socialism.

So what can be done to change or even eliminate socialism in our schools?

Some suggest the privatization of the school system will defeat socialism while others claim that putting God back in the classroom is the answer.

What appears certain is that socialism has a grip on our public education system that will not be easily loosened.

Parents and teachers, who are best qualified to educate children, must assert their objection to the state’s unwanted control of the education process.

Changing the system won’t be easy but it can be done. Just ask John Dewey.

Why do we have one of those?

Today is Constitution Day! And What is it All For? :: The Sovereignty Campaign 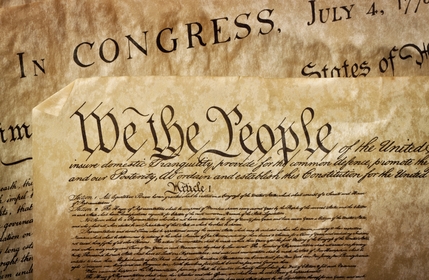 My Internet has been down all day and my provider was blaming my router. Guess what? It was the provider and just as suddenly as I was down, I am now back. 😉