British Cleric: We Wipe Our Asses The Way Allah Wants Us To… 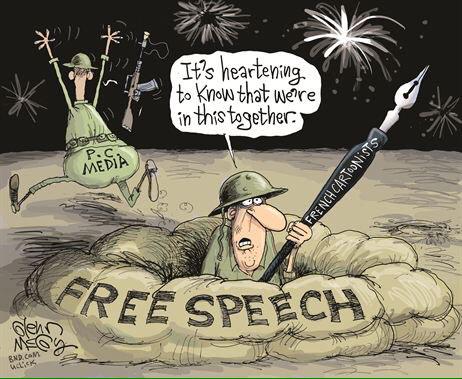 NoisyRoom.net Proudly Publishes the Mohammed Cartoons – Everyone Should Flood the Web With Them

We must not let fear stop us from exercising free speech and calling out the murderers as they strike those who would raise their voices against a broken and corrupt theology and political structure. Each of us must endeavor to show these asshats the disrespect and mockery they deserve. They can’t shut all of us up – they can’t kill every one of us. I choose to not be silenced, not be cowed, not kneel before a barbaric Caliphate and its evil followers. ISIS and the rest of their Islamic cohorts can stuff it. You can kiss my ass. 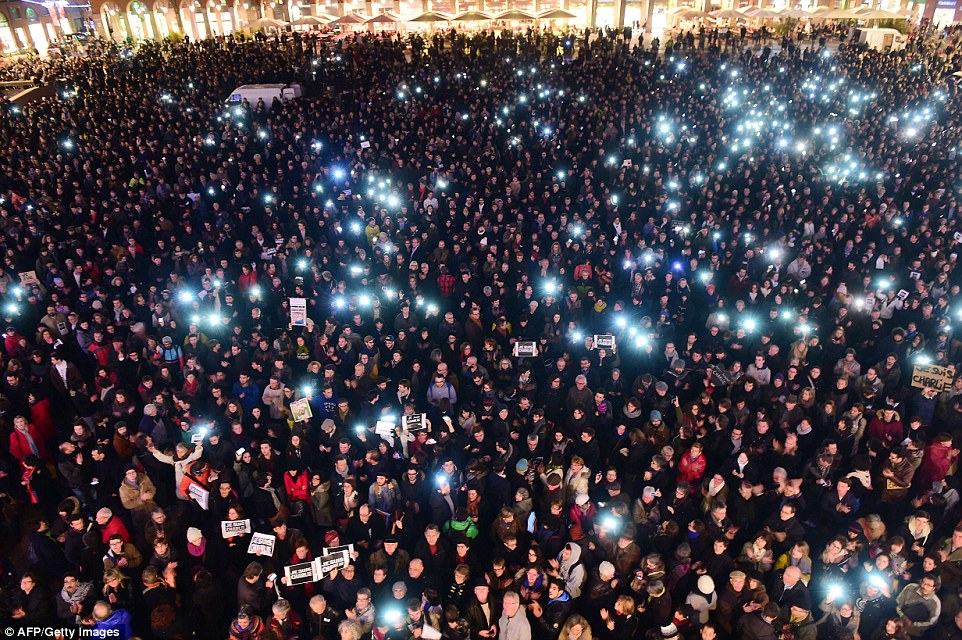 People gather in Toulouse last night to show their solidarity for the victims of the attack by gunmen on the offices of the satirical publication. 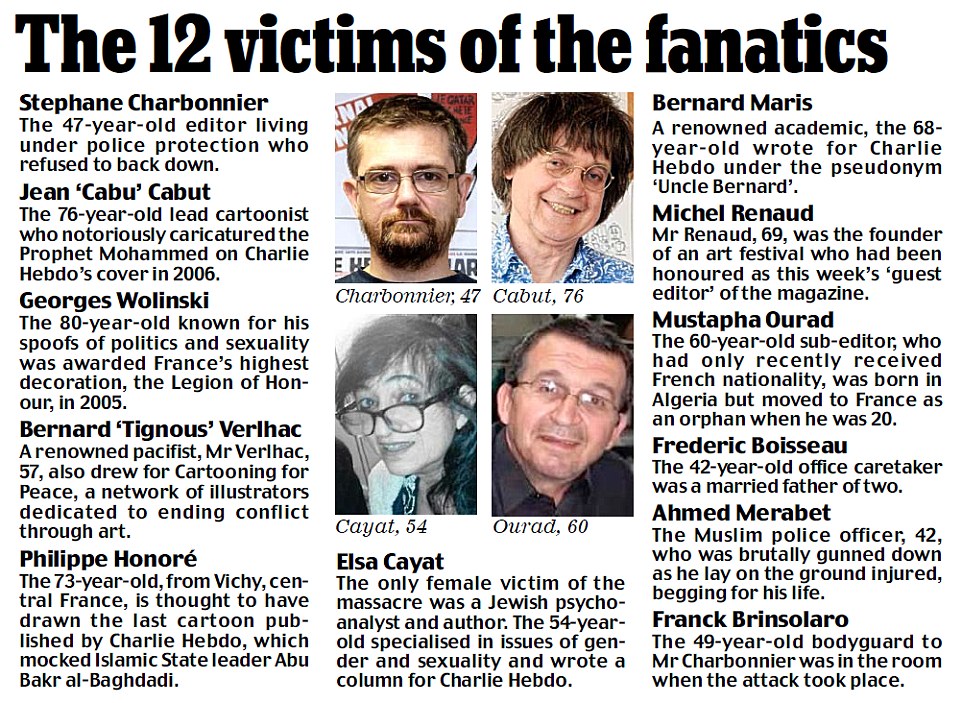 This edition is also dedicated to the police officers of the NYPD: 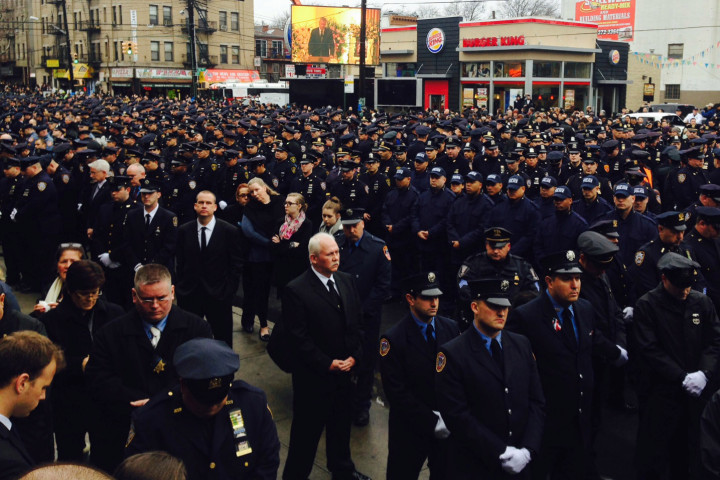 Freedom makes a huge requirement of every human being. With freedom comes responsibility – Eleanor Roosevelt

One of the chief tasks of any dialogue with the Gentile world is to prove that the distinction between anti-Semitism and anti-Zionism is not a distinction at all. – Abba Eban

The Jews are a peculiar people: Things permitted to other nations are forbidden to the Jews. – Eric Hoffer

We must take positions. Our weakness in the West is born of the fact of so-called ‘objectivity.’ Objectivity does not exist – it cannot exist!… The word is a hypocrisy which is sustained by the lie that the truth stays in the middle. No, sir: Sometimes truth stays on one side only. – Orianna Fallacci

This week’s winning essay, Joshuapundit’s – Who’s ‘Responsible?’, came about when I read an astounding statement from the mouth of European Union foreign affairs head Federica Mogherini. Here’s a slice:

Sometimes, a public figure makes a statement that simply defies the imagination in its blatant hypocrisy and ignorance of reality.

Those of you who have been following events in the region know that the Third Intifada against Israel is well underway, and that the Palestinian Authority and Hamas are doing their best to incite violence. Against this background, Mahmoud Abbas and the Palestinian Authority AKA Hamas/Fatah recently went to the UN Security Council in an attempt to get a resolution declaring a Palestinian State along the pre ’67 lines that would have called for forcing Israel back to indefensible borders, re-dividing Jerusalem and barring Jews from their Holy sites, ethnically cleansing 500,000 Jews, freeing all terrorists currently in captivity in Israeli jails and allowing any of the Arabs whom identify themselves as Palestinians to return to whatever they claim their homes were in Israel.

The resolution failed by one vote, but Abbas has promised to re-introduce it now that three pro-Israel nation’s terms on the Security Council have finished and three anti-Israel countries terms on the Security Council started in 2015. And Abbas is also attempted to join the International Criminal Court, saying that if he’s successful he will attempt to prosecute Israel there for war crimes.

Aside from violating both the Oslo Accords and The Road Map, this is nothing less than a hostile entity making a declaration of war against Israel.

In retaliation, Israel decided to take the measure of freezing $127 million in tax monies it gathered for Hamas/Fatah, and is considering other measures as well.

The EU immediately condemned this, and their reaction is worth looking at.

“An effective Palestinian Authority, committed to non-violence and a peaceful resolution of the conflict, is a key element for a two-state solution,” Mogherini said.

Mogherini said that “recent steps taken … could aggravate the already tense situation on the ground and bring them further away from a negotiated solution.”

“Both sides should refrain from taking actions which could raise obstacles to the rapid return to the negotiations,” she added.

She also threatened that the EU’s financing of ‘Palestine’ could be endangered by Israel’s withholding the money.

You have to wonder what planet the EU thinks it lives on.

Israel’s ‘responsibilities?’ What about the Palestinian Authority?

In exchange for being gifted sovereignty by Israel in the Oslo Accords over some land it otherwise had no claim to, The Arabs whom call themselves Palestinians agreed to do three things…renounce terrorism, recognize Israel’s right to exist and end anti-semitic incitement in its mosques schools and media. Those same three requirements were also part of the Road Map.

Not one of them has ever been adhered to, not by Arafat, not by Mahmoud Abbas and certainly not by Hamas.

While the PLO charter tepidly recognizes Israel, neither the Fatah charter or the Hamas charters do. Support for terrorism against Israeli civilians is a given, and not merely tolerated but rewarded. In the twenty years since Oslo, not a single person has ever been arrested by the PA security forces for killing a Jew. Financing of terrorist activity by the PA and Hamas is a long documented fact. Terrorist killers convicted of some of the most heinous murders by Israeli courts are called ‘holy martyrs’ by Abbas and receive a nice salary from the PA courtesy of Eu and American taxpayers, and these ‘martyrs’ are held up as heroes and role models to Palestinian society. They’re glorified in its media, lionized in its mosques and have public buildings named after them.

Mahmoud Abbas’s Moscow University treatise claiming that the Holocaust never happened and that the few Jews that were killed were the result of ‘Zionists’ collaborating with the Nazis is a required text in the PA’s school curriculum.

And the PA itself is now allied in a unity government with the genocidal Hamas.For that matter, the PLO has already said that the Oslo Accords no longer apply to them.

And when Mogherini talks about a Palestinian Authority, committed to non-violence and a peaceful resolution of the conflict, does she even recognize the years of sustained and constant rejectionism and unwillingness to negotiate anything by Arafat,Abbas and the PA as the main contributor to the current impasse?

In our non-Council category, the winner was the one and only Rush Limbaugh with The GOP Leadership’s Attitude Toward Its Own Base Is Unprecedented, submitted by Ask Marion. This is a transcript of Limbaugh’s comments on the air during his hugely popular radio show and he takes on the contradiction of a large part of the Republican leadership showing outright contempt for the voters that just gave them one of the largest GOP congressional majorities in history with his usual clarity and logic. Definitely read it.

Here are this week’s full results. Only Ask Marion was unable to vote, but was not subject to the usual 2/3 vote penalty: