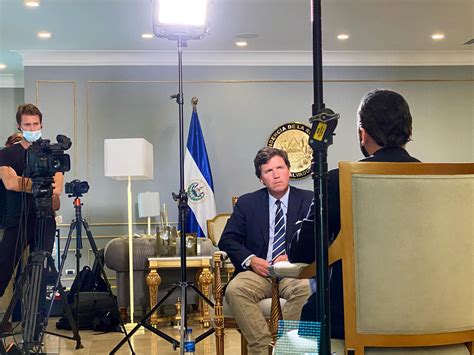 President Bukele told Tucker Carlson: “the best thing for both of is to keep our people here’.

Few may remember when FNC show host Tucker Carlson visited el Salvador to interview President Nayib Bukele. President Bukele validated a condition this author has talked about often, labor. With migrants leaving these countries to find a better economic/working environment, employment and economic stability can never be achieved in countries such as Honduras, Guatemala, or El Salvador.

Sure these countries are suffering for many reasons causing their respective citizens to seek new lives elsewhere, but draining the population over enticements given by the Biden administration has long-term devastating consequences. The better policy would be for the Biden administration to have meaningful conversations with US corporations to move their manufacturing operation from China to Latin America, in our own hemisphere and help stabilize these countries, stop illegal immigration and punish China for all the offenses, deadly and economically.

The numbers are getting worse for both sides. In a feeble attempt to go the diplomatic route on the causes of the migrant crisis, the Biden administration dispatched an envoy to El Salvador for discussions. Well, that did not go well as President Bukele has refused the meeting, and rightly so.

The Hill has reported:

The president of El Salvador reportedly refused to meet with a senior diplomat from the U.S. this week, while demanding the Biden administration cease criticizing his government.

Bukele also reportedly said that he would not meet with any U.S. diplomats until the Biden administration ceases its criticism of his government, following a statement from State Department spokesman Ned Price on Monday referring to the separation of powers in El Salvador’s constitutional government as “eroded.”

The Salvadoran president was also denied a meeting with President Biden after traveling to Washington unannounced a few weeks ago.

The State Department did not immediately return a request for comment from The Hill.

“[W]e enjoy … strong relations with El Salvador and its people, and we’ll continue to work closely with our Salvadoran partners to address the challenges in the region. And that includes, as we’ve been talking about, irregular migration. It includes corruption and impunity, it includes governance challenges. It includes respect for human rights, economic opportunity, and security,” Price said on Wednesday at a press briefing.

Bukele has also lashed out at U.S. Rep. Norma Torres (D-CA) over her frequent criticism of his government and other Central American governments.

In part from the AP: Specifically, the two said Bukele was angered by State Department spokesman Ned Price’s comments Monday that the U.S. looks forward to Bukele restoring a “strong separation of powers where they’ve been eroded and demonstrate his government’s commitment to transparency and accountability.”

Price’s comments followed a spat between Bukele and one of his fiercest U.S. critics, Rep. Norma Torres, a Democrat who co-chairs the Central America caucus in Congress.

In a series of Tweets last week, Torres accused Bukele of behaving like a “narcissistic dictator” indifferent to the plight of Central American migrants who undertake great risks to reach the U.S.

She attached a photograph that was widely circulated in 2019 showing the bodies of a Salvadoran migrant and his daughter laying lifeless in the Rio Grande on the Texas border.

“Send me a pair of glasses so I may see the suffering of your people through your eyes,” wrote Torres, who came to the U.S. as a child from Guatemala.

Bukele pointed out that he wasn’t even in office at the time of the deaths, which came during a previous surge in Central American migration under the Trump administration. He urged Salvadoran and other immigrants living in Torres’ Southern California district to vote her out of office.

“She doesn’t work for you, but to keep our countries underdeveloped,” he wrote.

U.S. policy in El Salvador has focused on promoting economic prosperity, improving security, and strengthening governance under the U.S. Strategy for Engagement in Central America. Congress has appropriated nearly$2.6 billion for the strategy since FY2016, at least$410million of which has been allocated to El Salvador. The Trump Administration has requested $445 million for the strategy in FY2020, including at least $45.7 million for El Salvador, and an unspecified amount allocated for the country under the Central American Regional Security Initiative(CARSI). Future U.S. engagement in El Salvador is uncertain, however, as the Administration announced in March 2019 that it intended to end foreign assistance programs in El Salvador, Guatemala, and Honduras due to continued unauthorized U.S.–bound migration. In June 2019, the Administration identified FY2017 and FY2018 bilateral and regional funds subject to withholding or reprogramming. It is unclear how funds appropriated for FY2019 in the Consolidated Appropriations Act, 2019(P.L. 116–6)and FY2020funds may be affected. Bilateral relations also have been tested by shifts in U.S. immigration policies, including the Trump Administration’s decision to rescind the temporary protected status (TPS) designation that has shielded up to250,000 Salvadorans from removal since 2001.A House-passed bill, H.R. 6, would allow certain TPS designees to apply for permanent resident status., would allow certain TPS designees to apply for permanent resident status. More country details here.