March 19th, 2011, Annual “Anti-War” March on the anniversary of the invasion of Iraq. Organized by far left wing radical groups, with a strong socialist “liberation” message throughout the protest.

This was written for eternity. 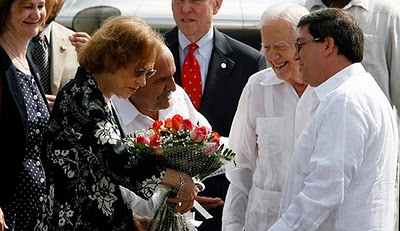 Former President Jimmy Carter began a three-day visit to Cuba yesterday, amidst a stormy background of seemingly constant escalation and de-escalation of tensions between the U.S. and the island nation…

Carter visited Cuba previously in 2002, the first and only U.S. president to visit Cuba since the 1959 revolution. According to the Cuban press, the visit “was a demonstration of his interest in better bilateral relations…”

The ex-president’s trip takes place during uncertain times for the island nation and its relationship with the United States. In what some consider the beginning of a thaw, the Obama administration loosened restrictions that President Bush had imposed on exchanges with Cuba…

Carter’s visit comes just before the next congress of the Cuban Communist Party, set to take place next month…

The party congress is one of the main reasons for Carter’s visit. According to the Carter Center, he and former first lady Rosalynn Carter traveled to Cuba to “meet with President Raúl Castro and other Cuban officials and citizens to learn about new economic policies and the upcoming party congress, and to discuss ways to improve U.S.-Cuba relations…”

While Carter’s trip is technically a private venture, sponsored by his organization, analysts say some sort of policy announcement, either from the Cuban side, the U.S. or both, is possible.

Wouldn’t Russian intelligence and their buddies in the Russian mafia just love this?

Russia and the United States may ease or even cancel visa regime fairly soon, the head of the State Duma’s committee on international affairs said on Wednesday.

“The idea seems fantastic to some, but I’m convinced that it is pragmatic and may be implemented in the foreseeable future, if not the full abolishment then at least eased visa procedures,” Konstantin Kosachev told the World Russian Forum annual conference in Washington.

He said that Russia was ready to ease visa regime on the condition that the concessions are mutual.

The Russian authorities have long been trying to persuade Europe to drop visas for Russian citizens, but their attempts have so far yielded no significant results.

Let’s bypass the horse. This is like the Trojans handing the Greeks the keys to their city.

Harvard economics professor Gregory Mankiw wrote an article that was published in the NY Times yesterday entitled, “It’s 2026, and the Debt Is Due.” In this article, Mankiw gave a hypothetical Presidential address the President of the U.S. might make in the year 2026 after a failed bond auction. Mankiw’s hypothetical Presidential address takes place in a scenario where in the year 2026, the U.S. Treasury “tried to auction its most recent issue of government bonds” but “almost no one was buying.” According to Mankiw’s hypothetical speech, during this 2026 crisis the President will admit, “The private market will lend us no more.”

Unfortunately, Professor Mankiw fails to understand that the U.S. has zero chance of surviving until the year 2026. What Mankiw predicts will happen 15 years from now is already happening today right under his nose, but somehow he fails to realize it.

According to Mankiw, the President will say in 2026, “Today, most of the large baby-boom generation is retired. They are no longer working and paying taxes, but they are eligible for the many government benefits we offer the elderly.” The fact is, the last baby-boomer turned 46 years old in 2010 and 46 is the age in which the average American reaches peak consumer spending. Therefore, even though most baby-boomers might not be retired, baby-boomer spending is now in free-fall while baby-boomers are simultaneously signing up for entitlement programs at record pace. This will begin to affect our economy today, not 15 years from now.

Mankiw’s hypothetical speech has the President admitting in 2026 that we “have to cut Social Security immediately, especially for higher-income beneficiaries. Social Security will still keep the elderly out of poverty, but just barely” and we “have to limit Medicare and Medicaid. These programs will still provide basic health care, but they will no longer cover many expensive treatments. Individuals will have to pay for these treatments on their own or, sadly, do without.” The truth is, if the U.S. government cut 100% of all spending except for Social Security, Medicare, and Medicaid, we would still have a budget deficit from these entitlement programs and interest payments on our debt alone. If the U.S. wants to prevent hyperinflation and survive until 2026, we need to make major cuts to these programs today. By 2026, it will be over a decade too late and these programs will no longer exist at all.

Mankiw’s hypothetical 2026 Presidential address goes on to say that “over the last several years” the U.S. has experienced a “vicious circle of rising budget deficits” and “as the ratio of our debt to gross domestic product reached ever-higher levels, investors started getting nervous”. Does Mankiw realize that the U.S. just reported a budget deficit for the month of February 2011 of $222.5 billion, more than the entire fiscal year of 2007? In our opinion, our budget deficits can’t rise much more viciously than what they already are today, without the U.S. experiencing an outbreak of hyperinflation. We need to begin sharply reducing our deficits immediately or else hyperinflation this decade is inevitable.

Our real debt to GDP ratio in the U.S. today is already north of 500% when you include unfunded liabilities for entitlement programs, as well as other commitments like the backing of Fannie Mae and Freddie Mac. It will simply be impossible for this figure to rise much higher without the U.S. experiencing hyperinflation. NIA believes that unless the U.S. government completely eliminated Social Security, Medicare, and Medicaid, there is no way the U.S. government will be able to stay afloat for another 15 years with such an unprecedented level of debt.

In 2026, Mankiw believes the President will admit that, “Our efforts to control health care costs have failed.” He suggests the President will proclaim that, “We must now acknowledge that rising costs are driven largely by technological advances in saving lives. These advances are welcome, but they are expensive nonetheless.” Does Professor Mankiw own a laptop computer, plasma TV, or mobile phone? These technologies are improving by leaps and bounds yet prices are falling. Technological advances are not driving health care costs higher! It is the government’s involvement in the health care sector and their failure to allow the free market to operate that is driving health care costs through the roof.

Professor Mankiw believes the President will continue by saying, “We have to cut health insurance subsidies to middle-income families.” NIA believes it is the very same subsidies Mankiw is referring to that are driving health care costs sky high. It is just like in the college education industry. If the government didn’t provide subsidies for students to learn voodoo Keynesian economic theories from professors like Mankiw, college tuitions would be a lot more affordable.

To solve this supposed 2026 crisis, Mankiw believes the President will announce, “We will raise taxes on all but the poorest Americans. We will do this primarily by broadening the tax base, eliminating deductions for mortgage interest and state and local taxes. Employer-provided health insurance will hereafter be taxable compensation.” Although NIA believes employer-provided health insurance should be taxable compensation because it would end the employer based health insurance system and make health insurance cheaper for all Americans, we believe it will be impossible for the government to raise any additional revenues from tax increases. We are at a point where any additional taxes will drive economic activity overseas and result in less tax receipts. When hyperinflation soon arrives, taxes will become irrelevant. The government will fund over 99% of its spending by printing money and less than 1% from taxation.

Mankiw also believes the President in 2026 will, “increase the gasoline tax by $2 a gallon. This will not only increase revenue, but will also address various social ills, from global climate change to local traffic congestion.” Come 2026, gasoline will probably cost $20,000 per gallon, if we are lucky. An additional $2 gasoline tax will be absolutely pointless and meaningless.

It would be nice to think that the U.S. will be able to borrow and print money for another 15 years to fund endless budget deficits and that 2026 is some magical year when all of our debts will come due. The economy does not work this way and it is disgraceful that our nation’s most prestigious ivy league schools are teaching such dangerous economic principles. Considering that a large percentage of our highest ranking government officials graduated from Harvard, it really explains a lot when you look at who is teaching economics at Harvard. Mankiw is the same professor who in April of 2009 called for the Federal Reserve to implement negative interest rates. Mankiw called for savers to be punished and for all Americans with $100,000 in the bank to have only $98,000 one year later.

It is the destructive Keynesian theories of economists like Mankiw that have gotten the U.S. economy into the dire situation it is in today. Mankiw and other professors like him are brainwashing American students into believing that forcing people to spend is the key to a healthy economy and the way to solve all economic problems is to create a lot of inflation. All across America, students are graduating colleges with hundreds of thousands of dollars in debt, no jobs, and no idea of how the economy actually works. They will spend the rest of their lives paying off their debts and trying to get the false economic information they were taught out of their heads. The college education system in America is the single largest fraud that exists today, and NIA is going to expose the truth about the government’s conspiracy to turn American students into debt slaves in our next feature documentary, coming in April.