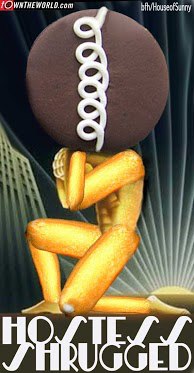 From the genius of iOwnTheWorld.

The day came last week, that I never would have dreamed would come about. Hostess (founded in 1930) went Galt and shut down laying off 18,500. Hostess had been going through severe financial challenges, so renegotiations with the unions was no surprise. They had already been through bankruptcy and restructuring twice before, I believe. They were dealing with twelve unions and had even brokered a deal with the Teamsters. They offered the unions a 25% stake in the company, seats on their Board of Directors and 100 million in debt. All they asked for was an 8% cut in wages. The Baker’s Union would have none of it, so now they get a 100% cut in wages. Ding Dong, the Twinkies are dead.

Thousands of members of the Bakery, Confectionery, Tobacco Workers and Grain Millers International Union went on strike last week after rejecting in September a contract offer that cut wages and benefits. Hostess said Friday the company is unprofitable “under its current cost structure, much of which is determined by union wages and pension costs.”

The brands will be sold to the highest bidder, so we may yet see them again. But don’t hold your breath in this economic climate. As a country, America grieves the loss of an American icon and the producer of clownie cake. And, I hate to break it to you, but petitioning the food nazis will not get them a bailout. No more will the following brands give us comfort food to deal with this administration (sniff):

Labor leaders (who will be keeping their $200,000 a year positions) are of course blaming the EVIL capitalists, while slyly insinuating Bain Capital greed is at work, conveniently ignoring the fact it was the “greedy capitalist bastards” who have been investing their own capital and resources into the Hostess brands since 2001, trying to save the company. What utter commie crap. The unions are strangling this country on purpose. They want to bring us to our knees, lower wages across the board, unionize everyone and control us with an iron Neo-Comm fist. The only ones at that point that will be well off are the union and political thug leaders. It’s the same hierarchy as Communism, because it IS Communism.

“What’s happening with Hostess Brands is a microcosm of what’s wrong with America, as Bain-style Wall Street vultures make themselves rich by making America poor. Crony capitalism and consistently poor management drove Hostess into the ground, but its workers are paying the price,” AFL-CIO president Richard Trumka said in a Friday statement.

It’s our old Marxist comrade Richard Trumka again stirring the pot. After he wrote on this, the Bakery, Confectionery, Tobacco Workers and Grain Millers International Union had the supreme nerve to have a statement on their site giving ‘thanks’ for the Hostess union workers. I’m sure their families will feel deep gratitude over the holidays to the Neo-Comm union that will make them go without food, gifts and possibly heat during the holiday season. Evidently, the Grinch wears the union label these days. 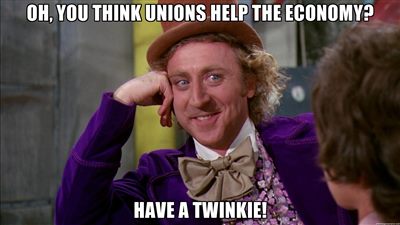 It’s over. Hostess CEO Greg Rayburn was straightforward and honest with the Neo-Comm union. Either we deal or we are done. This was not a tactic – it was sheer Atlas Shrugged. But the union is laying all the blame on Rayburn which is a huge pile of union dung — an absolute lie — that the media is pedaling and supporting. Tone deaf and elitist Good Morning America thought it was hilarious that Hostess shut down, celebrating with jokes and eating Twinkies on the set. Laughing at the expense of hard working families. More from the media:

NBC’s Savannah Guthrie read a statement on “Today” from the bakers’ union that said: “Despite Greg Rayburn’s insulting and disingenuous statements of the last several months, the truth is that Hostess workers and the union have absolutely no responsibility for the failure of this company. That responsibility rests squarely on the shoulders of the company’s decision makers.”

Rayburn responded that he had been “pretty straightforward in all the town hall meetings I’ve done at our plants to say that in this situation I think there is blame that goes around for everyone.”

So, 18,500 hit the unemployment lines and food stamps, furthering the Cloward and Piven strategy. A preview of what is coming for many, many companies and workers I fear. I feel for those workers and their families. The union did this and owns this. They don’t give a crap about their members. They are interested in power, politics and lining their dirty pockets. And don’t believe the propaganda that Americans don’t eat Hostess any more. That is just bunk. Besides, Michelle Obama is definitely telling America: “Let them eat clownie cake.”

We will not let the ‘Twinkie’ go into that creamy-filled void without a fight! The Twinkie Apocalypse will not go unchallenged. Here’s a link for you real Americans out there on how to make Twinkies. It comes from Top Secret Recipes and is by Todd Wilbur. Make sure you buy Todd’s book. Here’s a little history on the Twinkie:

The Twinkie was invented in 1930 by the late James A. Dewar, then the Chicago-area regional manager of Continental Baking Company, the parent corporation behind the Hostess trademark. At the time, Continental made “Little Short Cake Fingers” only during the six-week strawberry season, and Dewar realized that the aluminum pans in which the cakes were baked sat idle the rest of the year. He came up with the idea of injecting the little cakes with a creamy filling to make them a year-round product and decided to charge a nickel for a package of two.

But Dewar couldn’t come up with a catchy name for the treat – that is, until he set out on a business trip to St. Louis. Along the road he saw a sign for Twinkie Toe Shoes, and the name Twinkies evolved. Sales took off, and Dewar reportedly ate two Twinkies every day for much of his life. He died in 1985.

The spongy treat has evolved into an American phenomenon, from which nearly everyone has slurped the creamy center. Today the Twinkie is Continental’s top Hostess-line seller, with the injection machines filling as many as 52,000 every hour.

We will miss Hostess and all the wonderful treats and staples they brought us over the years. You can thank the meddling of the Neo-Comms for this, disciples of a man who never accomplished anything with his life except the codification of a philosophy of envy and a plan to make everyone, everywhere equally miserable.

Why “Neo-Comms,” you ask? Not hard, really. The Left delights in confounding analysis and understanding by hijacking and inventing new meanings for words and “calibrating” their implementations to defy definition by existing terms. When you see clearly a Communist bent to an activity, and you label it such, you are rebuked by semantic pedantry: “well, it’s not really Communism, because…” When you see, on another day, the same cadre engaged in clearly fascist command-and-control extortion of industry, and you label it such, the semantic pedants scold you yet again that “it’s not really fascism, because…” Likewise, you are told, these are not really socialists doing all this redistribution, because…”

So at every turn whenever you try to apply a label that captures this post-Communist, post-fascist, fusion-socialist, but always clearly Marx-inspired eat-the-rich, empower-the-thugs, mislead-the-poor latter day construct that places socialism plus a command-and-control power center as a parasite on “privately owned” industry, you hit a wall, because the strategic application of the Communist, fascist and socialist ideals has morphed into a hideous parasitic Puppet Master fusion.

The self-appointed, self-anointed, envy-driven “smart” people enslave the strong, the productive, the creative and inventive, and defy labeling. Fine, then. If the embodiment is new, perhaps the label should be new. And so it is. Neo-Comm. What’s new is old, what’s old is new.

Remember, though: people are not property. When Ayn Rand shared the vision of Galt, that was the theme and spirit of it. You may take what I have, but you don’t own me. I am not a slave.

And a beleaguered Hostess, after years of struggling under the yoke of parasitic Neo-Comm manipulation, despite the investment of millions by “evil greedy capitalist bastards” trying to keep it alive, has finally said, “you may take what I’ve built, but you don’t own me.” That’s the essence of going Galt.

The creative, productive, inventive minds behind what used to be Hostess will take their talent elsewhere. And what prize do the Neo-Comms win? Why, they get the carcass of the goose, the goose whose golden eggs used to feed 18,500 families.

28 thoughts on “Going Galt and the Neo-Comms”